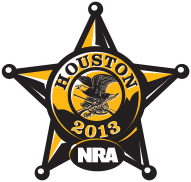 Over the past several months, our Second Amendment rights have been threatened like never before. In response, NRA members from across the nation poured into the George R. Brown Convention Center in Houston, Texas, for the 142nd NRA Annual Meetings & Exhibits.

From May 2-5, 2013, 86,228 members flocked to Houston to celebrate their firearm freedoms. The number of members in attendance exceeded last year's record-setting 73,740 attendees in St. Louis, Mo. NRA Executive Vice President Wayne LaPierre heralded this year's meetings as "the biggest celebration of American values."

Special recognition goes to MidwayUSA as the official sponsor of the 2013 NRA Annual Meetings & Exhibits. There was a multitude of events for members to enjoy throughout each day; not to mention the 400,000 square feet of space in the Exhibit Hall, which showcased 620 exhibitors from around the world. The biggest companies in the industry were present promoting their latest and most innovative products.

Attendees were entertained with a diverse choice of activities and events, and it wouldn't have been an NRA event without a few guns—or in this case, a whole wall. The NRA Foundation's Wall of Guns raffle, sponsored by Cabela's and Leupold and built by Legacy Quest Outdoors, drew large crowds, thanks to the dozens of new firearms that were beautifully displayed and awaiting winners. Whether drawn in by the collection of guns or by the hosts' loud banter, few show goers passed up a chance to visit the Wall of Guns, which raised more than $100,000 in support of The NRA Foundation.

Members had the chance to learn the value of their own guns; whether family heirlooms or firearms purchased elsewhere, experts from the National Firearms Museum were available on Thursday to appraise each firearm at the Antique Guns & Gold Showcase presented by Brownells. From Kentucky longrifles to revolvers straight out of Hollywood lore, there was no shortage of valuable, vintage firearms in Houston.

Members and their families were also able to test their skills. Throughout the weekend, the staccato beat of pellets hitting metal targets drew crowds to the Pyramyd Air Air Gun Range. Shooters of all ages took their turn on the firing line, many returning time and again. "Our mission is to grow the shooting community and help everyone enjoy shooting," explained Val Gamerman, President of Pyramyd Air. "I just like to see their faces when they leave. As an online business, we don't normally see the faces of our customers, so this is awesome."

Sunday's NRA Youth Day was also a big hit with parents and kids alike. There were plenty of events and activities geared toward the NRA's youngest members. The many youngsters in attendance were awarded a free 6-month membership before enjoying activities including a Laser Shot booth, bags of popcorn, an Annual Meetings scavenger hunt, an Air Soft 3-Gun course and more.

Entertainment was not just limited to the show's guns and gear. At NRA Country Jam III on Friday, country artists Kevin Fowler and the Eli Young Band rocked the General Assembly Theatre with their latest music. The concert, presented by Bushnell and benefitting the Folds of Honor Foundation, began with a heartfelt speech from Maj. Dan Rooney and ended on an energetic note as the Eli Young Band finished with their number one hit, "Crazy Girl."

The capstone event of the weekend, NRA's Stand and Fight Rally, presented by MidwayUSA, was held Saturday in front of thousands of members and broadcast to thousands more. Moderator Wayne LaPierre introduced comedian Frank Caliendo, whose hilarious impersonations of former President Bush and President Obama lightened the mood for the serious tone that followed. American conservative radio host Glenn Beck addressed our country's dire political problems and pleaded with NRA members to join together in rescuing our great nation.

The NRA Publications Division kicked off weekend events on Friday with a breakfast recognizing the recipients of the 2013 NRA Golden Bullseye Awards. The event celebrated the quality, innovation and value exemplified by recently introduced firearms, accessories and related equipment, as well as honored Pioneer Award winner Stephen D. Hornady, president of Hornady Manufacturing Co., for his contributions to the shooting sports.

On Sunday another breakfast drew an unprecedented audience. The NRA Prayer Breakfast (sponsored by Trijicon and Universal Coin & Bullion) attendees confirmed speaker Joe Gregory's sentiments, "Our most important meeting here is this one … we can avail much through prayer." Keynote speaker Dr. Bob Reccord, recalling how God told Moses to "stand firm" and then to "move out," urged NRA members to stand firm on their values and move forth to impact the world. Also on the dais were NRA Directors Joe DeBergalis and Susan Howard; Rick Caldwell; Dr. Rick Rigsby; Christian business leaders Mike Fuljenz of Universal Coin & Bullion, Tom Munson from Trijicon and Buck Knives' Chuck Buck. Visual worship artist Brian Keith Daniel inspired all with his unique talents as well.

NRA members poured into the sold-out NRA-ILA Leadership Forum, presented by MidwayUSA, on Friday to hear a full roster of nationally known speakers discuss the threat against our firearm freedoms and how NRA members are standing united to preserve our rights.

NRA-ILA Executive Director Chris Cox chastised anti-gun politicians and media elitists for using tragedy to push their political agenda. He challenged President Obama and senators who have been pushing for more restrictive gun control measures to prove they truly want to make America safer. "Prove it," he said. "Prove it by prosecuting violent criminals, prove it by getting serious about school security … and while you do that, do one more thing. Leave our freedom alone!"

Governor Rick Perry welcomed NRA members to the great state of Texas and pledged to continue his state's commitment to promoting personal responsibility and protecting our firearm freedoms.

"In Texas, we believe in freedom, personal responsibility, and the God-given right to defend yourself and your family. We never lose faith in our Founding Fathers' wisdom to include the Second Amendment to the Constitution among the Bill of Rights," Gov. Perry said.

Wayne LaPierre thanked the members for their tremendous support. To put a face on the law-abiding American gun owners the media elite had been attacking for their values, he asked for everyone in the audience to rise and be recognized when he called out their profession. Members of law enforcement, the military, doctors, teachers, tradesmen and students were among the thousands standing and cheering as Wayne thanked them for their efforts to protect our Second Amendment rights.

"We are the law-abiding Americans who believe that liberty is a blessing, not bestowed by government but by our Creator, that must be preserved for future generations," he proclaimed.

Those weren't the only influential figures present with something to say. Hosted by rock legend and outdoorsman Ted Nugent, the Freedom Is Not Free seminar, held Sunday, recalled the countless sacrifices made by members of the American military that have made our constitutional rights possible.

The bidding action was fierce at the National NRA Foundation Banquet & Auction (sponsored by Cabela's, Universal Coin & Bullion and U.S. Law Shield) held on Thursday. Firearms, hunting trips and countless other items were auctioned. The crown-jewel of the night: a custom, one-of-a-kind, NRA-themed airboat, donated by Diamondback Airboats and Taurus, that ultimately found an owner for a cool $65,000. All of the proceeds from the event will be used to support the future of the shooting sports and educational programs. The event held a record-breaking crowd of 1,780 attendees and raised a record $500,000.

Seven new members were inducted into the Golden Ring of Freedom at the NRA Ring of Freedom Brunch on Friday. Bill and Laura Bachenberg, Scott Blackwell, Pete Brownell, James Debney, George Kollitides and Wally McLallen received gold jackets in recognition of their gifts of $1 million or more in cash.

On Saturday, the Annual Meeting of Members drew crowds as NRA supporters gathered to conduct the association's business and learn about the state of gun rights from those who know the score. This event featured outstanding speeches by NRA leaders who man the front lines in our fight to defend our Second Amendment freedoms, including Wayne LaPierre, Chris Cox, outgoing NRA President David Keene, and incoming NRA President James Porter.

Judging by the crowd's reaction, there is no question that NRA members are unified and ready to Stand and Fight for our constitutional Right to Keep and Bear Arms!

With the 2014 congressional elections fast approaching, next year's Annual Meetings & Exhibits in Indianapolis promise to be even more exciting!

NRA CEO and EVP Wayne LaPierre addresses the crowd at the NRA Members' Meeting in Houston, Texas. He blasts political and media elites for using tragedy to advance their political agenda and assures that NRA will never compromise on constitutional freedom. LaPierre also talks about Obama's oft-quoted - and inaccurate - 90% figure and suggests he looks at Chicago's 90th out of 90th ranking in firearms prosecutions instead. Originally aired 5/4/13.

NRA President David Keene addresses the crowd at the NRA Members' Meeting in Houston, Texas. Keene notes that despite attempts by the liberal media and political elites, the NRA is stronger than ever. He also praises NRA CEO and EVP Wayne LaPierre for his tireless work to ensure Second Amendment freedoms for all Americans. Originally aired on 5/4/13.