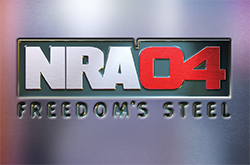 A Thunder Of Heroes

"The President and I welcome your support," concluded Cheney, "and I am confident that six and a half months from now, the American people will choose the confident, steady, principled leadership of President Bush." The crowd responded with an ovation. The theme of the Meetings, Freedom's Steel, paid tribute to heroes past and present, to police officers, firefighters, the men and women of the military, and also to NRA members who take the lead in the fight for the Second Amendment. Amid the backdrop of the war on terror and the lingering memory of Sept. 11, with our troops overseas, the opening ceremony focused on a special breed of Americans, on, as NRA Executive Vice President Wayne LaPierre so eloquently stated, "a thunder of heroes."

Pay tribute they did. NRA members from all branches of the military and local police officers and firefighters took the stage, announcing their names, ranks and hometowns. Numbering some 50 strong, they stood at attention as the crowd watched a moving video tribute to those who serve our country.

The city of Pittsburgh rolled out the welcome mat. Allegheny County Chief Executive Dan Onorato read a proclamation commending the NRA for its work and naming April 16 "Homeland Defender's Day" in Allegheny County.

Tribute also was paid to the absent Charlton Heston, who stepped down as NRA President last year due to Alzheimer's disease, but who is definitely not forgotten.

"While it's true that, on our watch, we've won many victories," said LaPierre at the Annual Meeting of Members, "we have much work left undone and many challenges that lie ahead. And this is the first time, in a very long time, that Charlton Heston is not on stage with us to lead us and inspire us.

At the Members Banquet, Vice President Dick Cheney was presented an original Cecil Brooks flintlock rifle by Craig D. Sandler (l.), Sandra S. Froman, Wayne R. LaPierre, Kayne B. Robinson and other NRA officers. Brooks (inset l.), who is 91 years old, has produced Kentucky long rifles for presentation to speakers since 1955. He was honored with an NRA Board of Directors Resolution recognizing his 49 years of service.

"Over the years, at these meetings, his massive stature and stirring words have created great moments that will live forever in history. Great moments and words that, two and 10 and 50 generations from now, will explain why we gathered in freedom's name."

In yet another highlight, NRA Board Member Oliver North addressed the audience via satellite hookup from a post near Fallujah, Iraq. Staff Sgt. Kevin Beneer, baritone soloist for the President's Own, the U.S. Marine Corps Band, performed a moving rendition of "Where the Eagle Flies," and The Oak Ridge Boys, Grammy and Country Music Association award-winning recording artists, elicited smiles with their mad dash to the stage as they waved their NRA membership cards, then treated the crowd to their hit tunes.

The Annual Meeting of Members opened with a prayer by NRA Board Member Susan Howard and the singing of "The Star Spangled Banner" by U.S. Marine Staff Sgt. Kevin Beneer. Honorees included the youngest and oldest Life members 1-year-old Michael Kochman of Pennsylvania and 98-year-old Claude Willoughby of Wisconsin, respectively.

Army 1st Sgt. James Taylor Jr. (r.) was one of many sons and daughters in uniform to be honored during opening ceremonies.

The theme of the Meetings, Freedom's Steel, paid tribute to heroes past and present, to police officers, firefighters, the men and women of the military, and also to NRA members who take the lead in the fight for the Second Amendment.

The reports of the officers followed roll call, adoption of the agenda and approval of the minutes. Executive Director of General Operations Craig D. Sandler opened with a speech based upon the American ideal of life, liberty and the pursuit of happiness. "This eloquent, simple phrase sums up everything NRA represents today," remarked Sandler. NRA Second Vice President John C. Sigler focused on the actions of Paul Revere, comparing today's anti-freedom forces to the Tories of yesteryear. "We will continue to defeat the enemies of freedom as long as freedom has enemies," he promised. NRA First Vice President Sandra S. Froman warned of the threat posed by a Kerry-appointed Supreme Court. "The words of the Constitution are fixed, but the Supreme Court decides what it means," she cautioned. "There will be no appeal." Chris W. Cox, Executive Director of the NRA Institute for Legislative Action, reported on the progress being made on Right-To-Carry laws and the federal litigation reform bill, which would protect gun manufacturers from predatory lawsuits, and he enumerated many of the political victories by gun owners over the past several years. He reserved his most heated comments for Kerry. "If you want to know where John Kerry stands on your gun rights," he said as he held up a photo of the Massachusetts senator standing with Senators Charles Schumer, Dianne Feinstein and Ted Kennedy, "I can show you where he stands literally. Do you want your Supreme Court chosen by this group?" he asked. "No!" the crowd thundered back.

In his address to the members, NRA President Kayne B. Robinson focused on hunters. "Hunters comprise one of the largest branches of our family," he said. "In fact, NRA has more hunters than any other organization." But hunters and their pastime are being threatened, said Robinson, by anti-gun forces and abusive bureaucrats and suffocating regulations. "War has been declared on our hunters and NRA must engage in that battle with all the tenacity we have brought to battles past. My vision is this: Just as we are America's gun rights organization, the National Rifle Association must also become the hunters" rights organization."

Billboards strategically placed around Pittsburgh and its environs proclaimed "4 Acres of Guns and Gear," but they could have read "4 Acres of NRA." The meetings and exhibits and NRA members filled the city, and the weekend featured something for everyone who answers the call to defend our Second Amendment freedoms and enjoys the shooting sports, hunting or gun collecting.

There were shooting clinics, including some at an airgun range; gun collections, including exhibits outlining the evolution of U.S. Marine Corps sniper rifles, guns of the National Matches and a display of World War II hero Sgt. Alvin York's personal memorabilia; special sessions on hunting and self-defense; and product demonstrations throughout the weekend. The Great American Game Calling Contest, now in its fifth year, pitted some of the country's top callers against each other. And of course, there were informational sessions, committee meetings, receptions and banquets, along with abundant opportunities to view and purchase the latest in firearms and accessories.

God gave us life. ... it's our moral obligation to protect that life."

So stated rock star, hard-core hunter and NRA Board Member Ted Nugent April 18, when he spoke about self-defense and other topics in a special session called "God, Guns & Rock -n- Roll." Nugent, who wrote a book by the same name in 2000, began with a blazing rendition of the "Star Spangled Banner" on his electric guitar, a la Jimi Hendrix, then entertained more than 1,000 NRA member/fans with his brash style and showmanship. He put anti-Second Amendment politicians on notice, and urged fellow NRA members to do the same.

"Ya'll got to tell them," he said. "It's absolutely essential that you confront them. Assert yourselves."

At the women's breakfast, Pennsylvania Lt. Gov. Catherine Baker Knoll told the assemblage, "We share an unwavering belief that the future of our unique American gift of freedom largely depends on you, the proud women of the NRA, to stand your ground and defend our right, our liberties and our values." Baker Knoll encouraged the women to join, promote and work as active members within the NRA and to "educate your co-workers on the issues that matter to all of us." Also during the breakfast, NRA Director Sue King presented NRA First Vice President Sandra S. Froman with the 2004 Sybil Ludington Women's Freedom Award.

The NRA and, consequently, the Annual Meetings are all inclusive: men, women, children, the able and the not so able.

For instance, as the ranks of women in the NRA continue to grow, so, too, do the special programs directed at them. At the session entitled "Women's Wear and Wilderness Gear," representatives from seven manufacturers: Browning, Beretta, Brunton, Leupold & Stevens, Loon Lake, Otis Technology, and Michael's of Oregon highlighted women-specific hunting and outdoor products. All of them indicated the women's market is where their companies have devoted special attention, creating women-friendly products and educating their staffs on selling to this growing segment of outdoor enthusiasts.

Hundreds of children gave the airgun range a try. They shot everything from beginners' handguns and rifles to those upper-end pneumatics often used by Olympic competitors. On Saturday, youngsters outnumbered adults in the standing-room-only crowd, where the excitement of 4-year-old Pittsburgh native Cairo Palmiere was contagious. She won her first ribbon for shooting, and her enthusiasm spurred older brother, 10-year-old Daniel, to new levels of concentration.

One member told the story of watching a man stroll up and down an exhibit aisle with his wife. The fellow "had a pained walk, and despite the fact that he worked that entire aisle, what had to seem a marathon, I knew his wheelchair was somewhere nearby," said the member. But he witnessed the loving glances exchanged between the man and his wife, and he realized it was a "defining moment at the annual meetings," he explained.

"For those simply unable to rise to or flee from a physical confrontation, the right to keep and bear arms is much more than a constitutional amendment. It's the God-given right to help ensure the welfare of their loved ones."

In Pittsburgh on April 15, Federal Cartridge brand manager Rick Stoeckel (l.) and President Mark DeYoung, along with NRA President Kayne B. Robinson, announced a unique NRA recruiting program. Through Dec. 31, purchasers of select Federal products will receive a coupon good for $10 off any NRA membership of $25 or more. Additionally, Federal has offered NRA membership to all its 800 employees.

LaPierre's stirring remarks at the Pittsburgh gathering assert the mainstream values most Americans share with the NRA - adding "you are Freedom's Steel ... because you do not bend." The NRA EVP's speech concludes with a moving tribute to former NRA President Charlton Heston.

Robinson outlines the growing bureaucratic obstacles for hunters and hunting traditions. The NRA president declares to an ovation, "no other hunting, wildlife or conservation group has this body's strength and prowess to rescue hunters and preserve their rights."