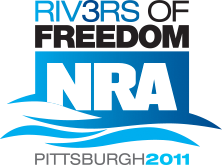 More than 71,000 NRA members flooded downtown Pittsburgh, Pa., for the 140th NRA Annual Meetings, held April 28 to May 1. Sponsored by MidwayUSA, this enormously popular event transcends the boundaries of a regular gun show or meeting of members-and nowhere was this more evident than at the 2011 NRA Celebration of American Values Freedom Experience held at the CONSOL Energy Center.

Emceed by NRA Executive Vice President Wayne LaPierre, the buoyant crowd of thousands were treated to a performance by the Randolph-Macon Academy Air Force Junior ROTC Band and Chorus before an invocation from LtCol Oliver North. Sheriff Paul Babeu of Pinal County, Ariz., opened the all-star lineup of speakers with a chilling front-lines account of how the Bureau of Alcohol, Tobacco, Firearms and Explosives' "Operation Fast and Furious" directly undermined his deputies' attempts to enforce the rule of law along our southern border.

Comedian Jeff Foxworthy injected some lighthearted humor into the proceedings and noted, "I performed a show last week, and I looked out and saw an audience ... today, I look out and I see patriots."

Michael Reagan, son of the late president, shared warm remembrances of his father before presenting the NRA Ronald Reagan Leadership Award to Joe Gregory-a charter member of the NRA Golden Ring of Freedom (donors who have given $1 million or more to NRA). "Joe's conviction in protecting our God-given liberty is so strong, he has led the fight to strengthen the National Rifle Association," proclaimed Reagan.

"I stand here tonight as a gun-clinger and a God-clinger ... unapologetically!" he said.

The National NRA Foundation Banquet and Auction, sponsored by Cabela's and Leupold, was a resounding success, with some 1,300 attendees bidding on dozens of items including guns, gear, accessories, hunts and other prizes.

Matt Duff and Jessie Abbate, the hosts of the new "Friends of NRA" television show on The Outdoor Channel, served as spotters during the live auction, which together with the other auctions raised $200,000 for The NRA Foundation.

Throughout the weekend NRA Annual Meetings attendees could purchase  Steel For A Steal raffle tickets for the chance to win firearms, with all proceeds benefitting The NRA Foundation. For every 100 tickets sold, one was chosen, with the winner given the option to select a single firearm from one list, or two from another. Firearms available included models from notable companies such as Kimber, Mossberg, Remington, Ruger, Savage Arms, Smith & Wesson, Springfield Armory, Thompson/Center and Weatherby. The raffle raised an additional $50,000 for The NRA Foundation.

At the annual Corporate Executives' Luncheon, Joe Gregory was honored as the 2011 Distinguished Corporate Executive. MidwayUSA founder and CEO Larry Potterfield announced the company's Project 12*12*12, that will allow customers to support the NRA's National Endowment for the Protection of the Second Amendment. The Potterfield family will match all contributions, dollar for dollar, up to $100. Project 12*12*12 will raise money for the critical 2012 elections and will run through November 2012.

Also at the luncheon, NRA launched its NRA Life of Duty program that serves and supports individuals who work to protect and defend the safety of the American people. Presented by Brownells, the program helps tell the stories of American heroes via its website and provides the opportunity for members to sponsor a one-year NRA membership for a uniformed American patriot.

At a special breakfast on Sunday, Wayne LaPierre inducted Claytie and Modesta Williams into the  NRA Golden Ring of Freedom, whose members have donated $1 million or more to the NRA.

During the NRA Annual Meetings, the David L. Lawrence Convention Center in downtown Pittsburgh seemed stuffed to the gills with a record-setting 559 exhibitors

Just before the Annual Meetings opened, the  Antique Guns & Gold Showcase offered attendees the chance to have their firearms appraised by experts from the NRA Gun Collectors Committee. The early birds also brought gold pieces and other coins to be appraised by staff from the event's sponsor, Universal Coin & Bullion. Noteworthy firearms were evaluated for the televised portion of the event by Jim Supica and Philip Schreier of the National Firearms Museum. Outstanding pieces included a 1903 Springfield rifle still in the original shipping box, with papers, from the Department of Civilian Marksmanship from the 1950s; a Winchester 1873 with a special-order barrel; and a flintlock rifle from a well-known maker in stellar condition.

Acres Of Exhibits To Explore

Fun For The Whole Family

The air gun range, presented by Pyramyd Air, welcomed more than 3,000 visitors. Kids and adults alike took advantage of the chance to send pellets down range-and many experienced shooters found that the younger ones were serious competition. Visitors also got a sneak peek at a new target and scoring technology, ShotResponse, that will be making its official debut at this year's inaugural National Defense Match at the National Championships at Camp Perry.

Getting Down To Business

On Saturday, April 30, NRA members convened for the Annual Meeting of Members to participate in the Association's business meeting and to hear NRA officers deliver powerful speeches on the status of our Right to Keep and Bear Arms.

NRA Executive Vice President Wayne LaPierre berated the Obama administration for its attempts to disarm law-abiding American citizens, including BATFE's failed "Fast and Furious" program. He stressed how vital it is, in this anti-gun climate, to continue the fight to preserve our firearm freedoms.

"Our liberty lives in the Second Amendment, the fundamental right that separates us from all other nations on Earth," he said. "That freedom makes America better than other countries. It makes us stronger."

NRA-ILA Executive Director Chris W. Cox, referring to the ever-changing terminology spouted by anti-gunners, "read" a page from his own political dictionary.

"'Success' is a favorable or desired outcome and you've achieved a lot of it," he said, enumerating NRA's recent legislative victories. " ... Right to Carry is now a right restored in more than 40 states and counting!" he said.

NRA President Ronald L. Schmeits reflected on the Association's vital role in preserving our firearm freedoms. "It is in the bearing of arms, law-abiding Americans at the range, in competitions, in the field-it is by shooting and hunting that our rights, our heritage and our nation are preserved," he said.

NRA First Vice President David A. Keene reviewed the list of accomplishments of those who have helped to make the NRA into "the most effective advocacy organization in the history of this country."

NRA Second Vice President James W. Porter II spoke of the secret to NRA's success. "It's in that foremost commitment to the Second Amendment that NRA finds its greatest strength," he noted.

NRA General Operations Executive Director Kayne Robinson took to task those mayors and police chiefs in anti-gun cities who choose not to defend the Second Amendment to the Constitution.

This year marks the first time that the NRA Women's Pistol Instructor Training Course has been held in conjunction with the Annual Meetings. As 18 women studied the fine points of teaching responsible pistol use to other women, Diane Danielson of NRA's Women on Target Instructional Shooting Clinics stressed the importance of this new program. "Having a female instructor can make shooting a firearm for the first time a more positive experience," she said. Although this class was the first of its kind, Danielson assured it won't be the last. "This course isn't just going to be held at future Annual Meetings," she emphasized. "We're rolling this out nationwide-beginning now!"

Wayne LaPierre introduced Lynne Cheney and her daughter, Liz, as the keynote speakers at the 5th annual NRA Women's Leadership Forum Luncheon. The event was hosted by Forum co-chairs Susan LaPierre and Suzie Brewster. Lynne Cheney spoke about the importance of making history appealing to children, as she does in her series of history books. Liz Cheney, an attorney and mother of five, talked about her collaboration with her dad, former Vice President Richard B. Cheney, in writing his memoirs. The women in attendance had an opportunity to bid in a live auction for a Kreighoff Semprio rifle and also participated in a silent auction that offered premium firearms, jewelry, furs, artwork and more.

The prestigious National Firearms Law Seminar, which grants continuing education credits to participating attorneys, covered topics from how to build on the success of the  McDonald and  Heller decisions to federal firearms laws and trying a self-defense case.

NRA's Clubs & Associations Workshop drew members from across the country who are interested in what NRA can do to promote the growth of clubs and state associations. Topics covered the benefits of club affiliation, the importance of a state association, how to apply for NRA grants and range services.

Robinson warned that onerous regulations and the constant creation of new fees are leading to a "death spiral" that drives people away from hunting.

Special thanks go to Cabela's for sponsoring this fine array of seminars.

Raising Voices In Prayer And Song

Attendees began Sunday bright and early at the annual Prayer Breakfast, sponsored by Trijicon, where they joined in worship with a lineup of inspirational speakers. LtCol Oliver North served as the Master of Ceremony.

The keynote address was presented by Nebraska Congressman Adrian Smith, a forceful advocate for faith and the Second Amendment. Mike Jones, a school security director from Florida, shared his experiences from a hostage incident, and Georgia clergyman Dr. Ike Reighard led the service in prayer. Worship music was provided by recording artist Alicia Williamson Garcia.

While Nugent rocked the house, earlier in the weekend country fans were treated to some good-times country music. Gun owner and Army veteran Craig Morgan was the headliner for NRA Country Jam 1.On Sunday, as the Exhibit Hall began to clear, there was still one ballroom filled to the brim. Members lined up for hours to see Ted Nugent's 2011 I Still Believe seminar. The rocker and ardent supporter of the Second Amendment rallied the more than 1,500-member crowd from the red, white and blue stage with a jarring version of "The Star Spangled Banner" on his electric guitar before discussing his run-ins with anti-hunters, his family values and Ted Nugent's Kamp for Kids.

Fans also tapped their toes to Nashville acts Sarah Darling and the Due West band. Money raised from the Bushnell-sponsored show was donated to Folds of Honor, a foundation that provides financial aid to families of fallen soldiers. During the concert, Folds founder and Air Force Major Dan Rooney presented both Morgan and NRA-ILA Executive Director Chris W. Cox with authentic flying jackets as tokens of appreciation.

NRA Country Jam 1 promises to be the first of many fun charity concerts promoted under NRA's new banner, NRA Country. To see photos of the concert, check out popular NRA Country artists and to buy upcoming event tickets, go to www.nracountry.com.

"It is in the bearing of arms, law-abiding Americans at the range, in competitions, in the field-it is by shooting and hunting that our rights, our heritage and our nation is preserved." NRA President Ron Schmeits speaks at the Members' Meeting in Pittsburgh at the 2011 NRA Annual Meetings. Originally aired 4/30/2011.